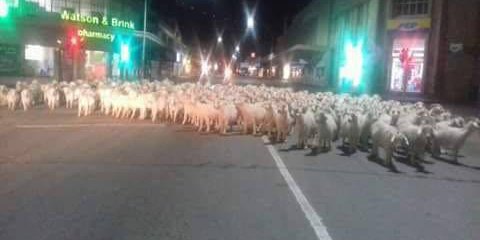 The small town of Oudtshoorn in the Klein Karoo, has a lot happening, especially at night time! These app. 700 Angora goats went on a shopping spree in the early hours of the morning, only to find out that all the shops were closed! Because in Oudtshoorn, everybody sleeps at 2h00 in the morning. Except for the police on duty. They discovered these goats in the centre of town, while doing their routine check at night. Whether their end destination was Watson and Brink pharmacy or Shoprite, one would never know. They were halted in their tracks and brought back to the field where they were supposed to be grazing – almost 3 km from where they were found! The farm is on the edge of the town of Oudtshoorn, and these goats probably thought the grass was greener on the other side. The goats belong to Mr Piet Schoeman, who is farming just outside of Oudtshoorn. If there is still one in your backyard that got lost during the shopping extravaganza, and you would like to return it to, please inbox us at Berluda Farmhouse and Cottages.